“It was my first time doing research that was my own,” Rochette-Yu Tsuen said. “It was supposed to be a botany-based project that was to be a semester long, but it turned out to be a year and a half.”

Rochette-Yu Tsuen’s research project involves the use of the Naupaka Kahakai plant by extracting a compound that could be used in sunscreen. His hope is to reduce the damage to coral reefs caused by current sunscreens on the market. What he has found to be enjoyable was that the project applied microbiology, chemistry and marine biology concepts and skills.

Rochette-Yu Tsuen has attended three conferences: the Community College Undergraduate Research Initiative (CCURI) in Arizona, National Conferences on Undergraduate Research (NCUR) in Georgia, and the Hawaiʻi Conservation Conference (HCC) in Honolulu. All of which he presented a poster showcasing his data. He won the “Best Undergraduate Poster Presentation” award at HCC. Rochette-Yu Tsuen will be presenting at the Society for Advancement of Chicanos/Hispanics & Native Americans in Science (SACNAS) conference in Honolulu on Oct. 31. 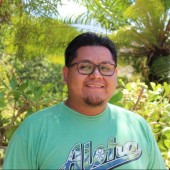 Marco was born in Oaxaca, Mexico, and grew up in California. During his time at KCC, he has been working on completing an associate's in Biotechnology and Biomolecular Laboratory Science. His education will continue at UH-Manoa, where he will pursue a BS in Molecular Biosciences and Biotech. Currently, he is working on a research project involving CRISPR technology. In his free time, he enjoys playing tennis, cooking, working out, giving haircuts and watching "The Office."