It had been difficult for me, moving from Virginia to Hawaii. Anxiety and stress put a damper on the excitement that I initially felt upon arriving on the island. Freshly discharged from the military, I felt unprepared and afraid most of the time. The paychecks had been steady for the last 5 years, and now on my own, I almost wished I had them back.

With my first college semester around the corner, I knew that I had to take back control of the way I felt. After some self-convincing, I began leaving my apartment for short increments to go for a bike ride or a walk. Battling the looming feeling of pre-destined failure was a challenge that got the best of me many times. As I worked toward a state of normalcy, I noticed that the local Humane Society was located only a few blocks away from my apartment.

I visited the shelter occasionally, comforting the lonely animals as best I could. I wanted to reciprocate the way they made me feel like everything was okay. After a particularly discouraging day, I made my way to the shelter yet in search of relief. They were closing in an hour, and only a few animals remained after the New Year’s adoption event they held annually. I made my rounds before entering an isolated section where one dog sat alone in the fenced-in area.

The moment I laid eyes on him, I knew he’d be coming home with me. He was a large dog sporting a white and faded-brown coat of fur. After studying me for a moment, he made his way over to where I was standing and put his body against the fence so that I could pet him. He had a deep sadness in his eyes that made me feel more vulnerable than I already was. At the last moment before closing, I finalized the paperwork and led him out of the shelter.

My mental state improved immensely the moment we left together. The feeling of helplessness was replaced with a sense of responsibility. I knew that I had to pull it together if I wanted to give him the life that he deserved. The anxiety I’d been burdened with before slowly made its way to the back of my mind.

I decided to name him Waylon, after the outlaw country singer that never blended in with the crowd. Waylon (the dog, not the singer) had been tied to a post and left to fend for himself on the North Shore, and I’d been locked to a feeling of absolute failure in Honolulu. We found each other at the right time, and I haven’t looked back.

Waylon wakes me up at 7 a.m. every morning, so naturally, I’ve developed a routine that’s strengthened my sense of purpose. The responsibility of walking, feeding, and loving him leaves me no time to sit around and think about the many ways that things could go wrong. He knows when I’m not having my best day, so he encourages me by licking my face and forcing me to smile. Obstacles that once felt insurmountable are now a walk in the park, no pun intended.

My psychiatrist recently recommended Waylon as my Emotional Support Animal, a recommendation that is officially recognized under the Fair Housing Act and Air Carrier Access Act. When a situation becomes overbearing, I can confidently face it with him by my side. Although mental health can be a sensitive subject, it’s important to know how to deal with anything life may throw your way. Simple tasks like exercising regularly, developing a routine, and getting involved in the community can foster a sense of wellness that will drive out negativity. Taking an hour out of my week to visit the Humane Society not only improved my state of mind, but it ultimately led to the solution that I’d been searching for. 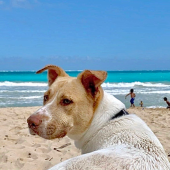