Sitting on a cake given as a gift from Chikushi Jogakuen University are 12 cookies that represent all of Leila's classmates from her study abroad experience, it's diversity ranging from Hawaii, Australia, South Korea, India, Canada, and Malaysia. (Photo courtesy of Leila Esteban)

A lot of students have always wanted to travel to another country for the learning and cultural experience, but not all will take the opportunity or know where to go to learn more about it. Offered here at KCC, the Study Abroad program is The Freeman Foundation Community College Program that allows students to travel to other countries to experience and learn intensive language training and service learning.

Several students in the past 10-12 years have joined the program and traveled to different places in Asia such as Japan, Korea, China, and even Vietnam. Many join to improve upon their language skills, earn college credits, learn more about the ever-expanding global economy, and of course, for the experience overall being in another country.

The eligibility criteria is:

If students are able to meet the requirements, they will then apply for the program following four easy steps. Those who are selected into the program are entitled to a scholarship that provides financial assistance for tuition, books, and most meals during the first semester. During the course of the second semester, the scholarship also provides round-trip airfare from Honolulu to the chosen country for study, local transportation within the country, tuition, room, books, most meals, and stipend.

There are many students who still attend KCC that have already completed the program. Here is one student who I’ve spoken with about their experience with Study Abroad: 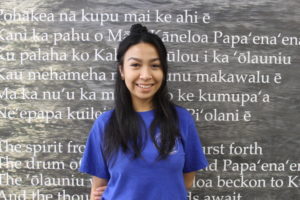 Leila Esteban is a 2nd year student who specializes in financial aid as a Ho’okele and Lunalilo Peer Mentor. (Photo by Lexus Yamashiro)

Esteban is a 2nd year college student attending KCC. She attended the Study Abroad program in Fukuoka, Japan, during the first three weeks in July. She stated that making her way to Japan was very relieving since she didn’t have to worry about major payments. Her flight was about $700, and because the scholarship helped cover most of it, she only had to pay $200; she had been reimbursed about ¥60,000 yen ($500 in U.S.)

Q: What was it like for you when you first landed in Japan?

A: I was very culture shocked, I was surrounded by all of these Japanese people speaking Japanese and here I was like “Uh … I don’t understand what they’re saying.” Plus it was hard too since I was really tired from my flight, it was 10 hours long, and it was crazy since they invited us to a welcome party and I was so tired, but I had a lot of fun. It was really hot too when I got there since I went during the summer – don’t go during the summer, it’s SO hot – but yeah, it was a lot of fun, very welcoming. 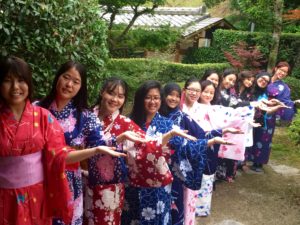 Q: How was the experience of being amongst other international students?

A: Well there were two girls chosen from Hawai‘i along with 10 other girls from different countries. We all got to spend time with one another while up in Japan and get to know one another. We would occasionally get together too when we were all available, and we just connected really well! I didn’t think that I would talk with anyone while there (laughs), but I ended up getting to know everyone well and we all just had a lot of fun. It was very different, yet influential since it has helped me in determining my major. I am going to major in Hospitality, but after studying abroad I’m kind of thinking about either double majoring or getting a Bachelor’s in Japanese language and studies. It was just really helpful getting to learn Japanese and overall one of the best experiences I’ve had.

Q: What is something you would like to tell students who may be interested in joining the program?

A: Even if you’re just a little interested, to just go for it anyways, because the things that you can study abroad is so much more diverse than a classroom.

Visit the website at http://go.hawaii.edu/FD or the office located in Iliahi 107.